The Talking Turtle and Why It Matters 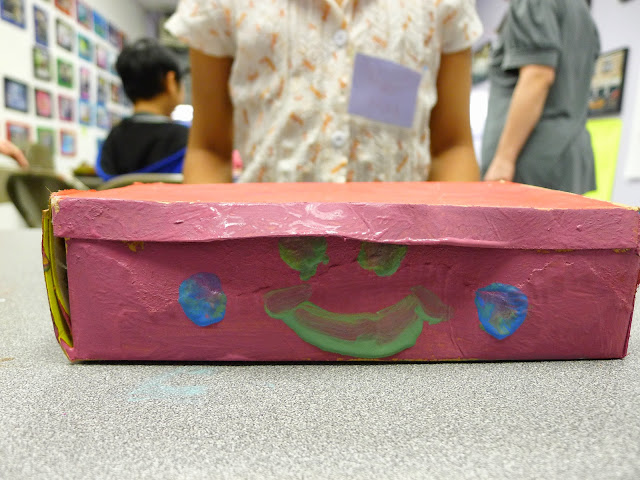 A young girl in BuildaBridge’s Refugee Project enthusiastically placed her newly painted inside-out box directly in front of me on the table from where I was observing the class.  The project of the month was about recycling and repurposing. The children, with the help of the teachers, had carefully taken discarded boxes, turned them inside out, glued them back into a box shape, and and were intently painting something they imagined.

“Oh, that is very interesting!” I encouraged.  “I looks just like a turtle.”

She smiled and nodded with pride.

“Does your turtle have a name?” I asked.

“This is Talkie the Turtle.”  She picked it up and held it toward my face.

“And what does the turtle do?” I asked.

“He talks.” She answered.

“Talkie stuff!” She replied and quickly carried Talkie the Turtle back to the group to continue her painting.

Later in the evening I shared my conversation with Natalie Hoffman, Art Therapist and BuildaBridge Artist-on-Call Lead Teacher for the class. According to Natalie, the turtle is a theme for children in transition. She agreed to share her research conducted with children in foster care. Enjoy this informative piece.

A major finding of [my] research was that for [some] children the turtle emerged as a symbol that adequately embodied many of the qualities of their experiences of insecure attachment and placement into foster care. As a symbol, turtles have several note-worthy connotations that are relevant to understanding the experiences of these children.

Turtles are resilient animals with “amazing survival skills and strategies” (Andrews, 1997, p. 364). The choice of turtles by these children may be reflective of the skills needed to survive multiple placements in foster care. Turtles have heightened senses, including the ability to hear well, sense vibrations in the water through their skin and shell, perceive colors, and smell (Andrews, 1997).  These finely attuned senses may parallel the hypervigilance that is often seen as a self-protective measure in neglected children who have been in multiple foster homes (Levy & Orlans, 2000; Koplow, 1996; Hildyard & Wolfe, 2002; Hurtwitz, 2003). Children in the foster care system use this heightened sense of awareness to learn about their new foster homes and their new attachment figures (Hurwitz, 2003). In addition, turtle shells are also hard and offer physical protection. The hard shells of turtles may reflect the need for security that these vulnerable children face as a result of neglect, abuse, and the resulting inability to experience mother as a secure base.

As previously stated, [the] children indicated the use of avoidance as a coping mechanism. Interestingly, two of the children in this study repeatedly discussed a fear of isolation and an aversion to being left alone or abandoned, which is consistent with the literature (Lush, Boston, Grainger, 1992). Directly prior to data collection Claire had been “ignored” by her mother when she did not show up to her supervised visit. Claire appeared extremely hurt by her mother’s actions and stated that bad moms do “not want to talk to [children]”. This finding suggests that for both of these children, part of their experience during the formation of their early attachments was a mother who did not respond to their signals, or perhaps who was not even present to respond.

When this fear of abandonment is considered simultaneously with the metaphor of the turtle, an animal that chooses to isolate himself inside of his shell, it becomes apparent that avoidance and social isolation may be an adaptive response for these children. The children in this study described either physically hiding to achieve safety, or mentally dissociating and detaching from the situation. Both of these reactions are possible responses to neglect to avoid the prospect of future abandonment. The literature states that children who have been neglected will generalized their experiences with mother to other caregivers (Bowlby, 1973, 1988; Karen, 1994), and will anticipate that others will neglect them even if neglect is no longer an issue (Pearce & Pezzot-Pearce, 2001). Whereas during neglect an attachment figure chooses to ignore or isolate a helpless child, a turtle himself chooses to shut out the outside world when he enters his shell. Children who have previously been victimized by neglect have the opportunity to actively choose to remove themselves from a situation (or attachment relationship) so that they are now in control. Similarly, if a frightened child in foster care does not believe that his/her mother will be able to protect him/her, that child can change from passive to active by choosing to hide from things that are scary or overwhelming. Additionally, the discussion of not wanting to be left alone and the choice of turtle by these children may be a reflection of their desire (and ability) to actively reject the new attachment relationships with foster families in fear that if they do not the families with reject them.

In addition to serving protective functions, turtle’s shells serve another purpose in that turtles literally “carry their home on their backs” (Andrews, 1997, p. 364). This may be representative of these children feeling that only what they can physically take with them from home to home is worth attaching onto. The children in this study may have difficulty attaching to their foster families because they are aware that they cannot take these people with them when their next change of placement occurs. If ‘home’ is only what you can carry with you when you have to move, than certainly new foster parents are not home, and should not be attached to. Because of their experiences of loss, they are reluctant to build new relationships that they believe they will not be able to ‘take with them’ to their future placements.

In Nigeria, turtles also represent the female sex organ (Cirlot, 1983), as well the primal mother and motherhood in Native American culture (Andrews, 1997). In the Far East, their shell represents heaven and their square underside represents earth (Andrews, 1997; Cirlot, 1983). In summation, the turtle is a “symbol of Mother Earth and a reminder that she provides for all of our needs” (Andrews, 1997, p. 365). In this sense, these children may be expressing a belief (or wish) that their biological mother can provide everything for them that they need, even though this may not have been the case in actuality.

However, when examined a different way, a turtle as a symbol of an all-providing-mother earth may be representative of the insecurely attached foster child’s knowledge that their mother will not meet their needs, and that they in fact must provide everything that they need for themselves. In this way a turtle may also be reflective of the self reliance and parentification that these children have been forced to develop as a result of being separated from their mothers (Fleming, 2006; Samuels & Pryce, 2008). It is interesting that in response to the directive “draw a mother and baby animal in a place doing something”, two children chose turtles, because in reality, turtle mothers do not spend any time with their young. Mother turtles lay eggs, which they usually bury along shorelines. When these eggs hatch, the new baby turtles “are on their own. They in turn must make their way to the waters” (Andrews, 1997, p. 366). This independent aspect of young turtles may further be a reflection of the self reliance that insecurely attached children in the foster care system develop. Contrary to popular belief, turtles can actually right themselves when they become flipped onto their backs by using its strong neck and head. This ability to right itself is “a reminder to use your own head and knowledge to right yourself when your world gets topsy turvy” (Andrews, 1997, p. 365). By choosing to project themselves onto turtles in their own drawings, these children may be expressing the way in which they have had to learn to care for themselves, and in a sense become their own mothers.

From,  "The Experience of Insecure Attachment in Latency Age Foster Care Children as Communicated Through the Drawing of a Mother and Baby Animal in Conjunction with an In-depth Interview: A Phenomenological Study": By Natalie Hoffmann, 2010. 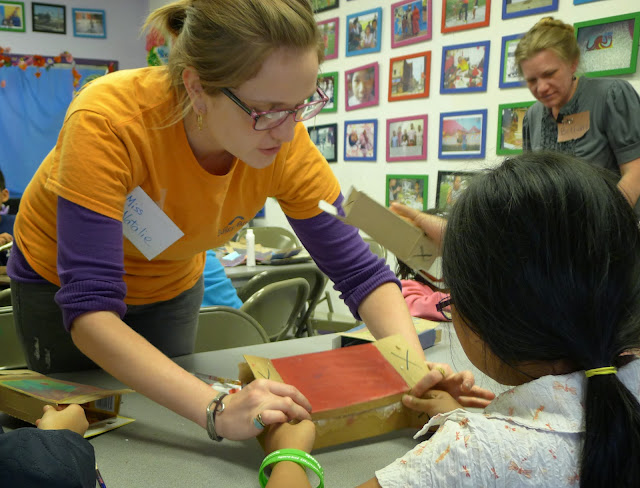 Natalie helping glue the box that became Talkie the Turtle.

Natalie Hoffmann is a board certified Art Therapist and a lifelong Philadelphia resident and artist. In 2008 she earned her Bachelor of Fine Arts Degree with a concentration in painting from the University of Delaware. Although Natalie loved creating art of her own–taking a particular interest in oil and acrylic painting–she always knew that she wanted to use her love for art-making in order to help other people. To accomplish this goal, Natalie earned her Master of Arts in Art Therapy degree in 2010 from Drexel University. Natalie fell in love with using Art Therapy to help heal children and adults suffering from trauma. In 2011, Natalie began working full time as an Art Therapist at Friends Hospital in Philadelphia, working with adults suffering from mental illness, addictions, and trauma. In addition to running Art Therapy groups at Friends, Natalie has piloted the use of community mural projects and patient art shows to engage patients in their Recoveries. Natalie also contributes to the field of Art Therapy by providing clinical supervision to Drexel University and Pratt University Art Therapy students, editing and sitting on the committee of students’ theses, and providing guest lectures for students. Natalie’s experiences with BuildaBridge began in 2010 and have included working with children experiencing trauma and homelessness at the NPIHN and the Women Against Abuse shelters. Additionally, Natalie helped to pilot BuildaBridge’s Refugee Mental Health Project providing Art Therapy to Iraqi women and children in 2011, and currently is running an Art Therapy group with Burmese children in South Philadelphia.

Consider supporting this and other projects of BuildaBridge by making a donation.
Posted by ncorbitt at 8:17 AM 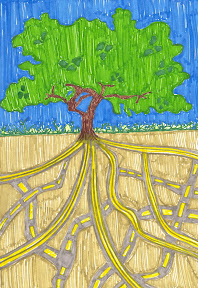 by Kelly Finlaw, Artist on Call